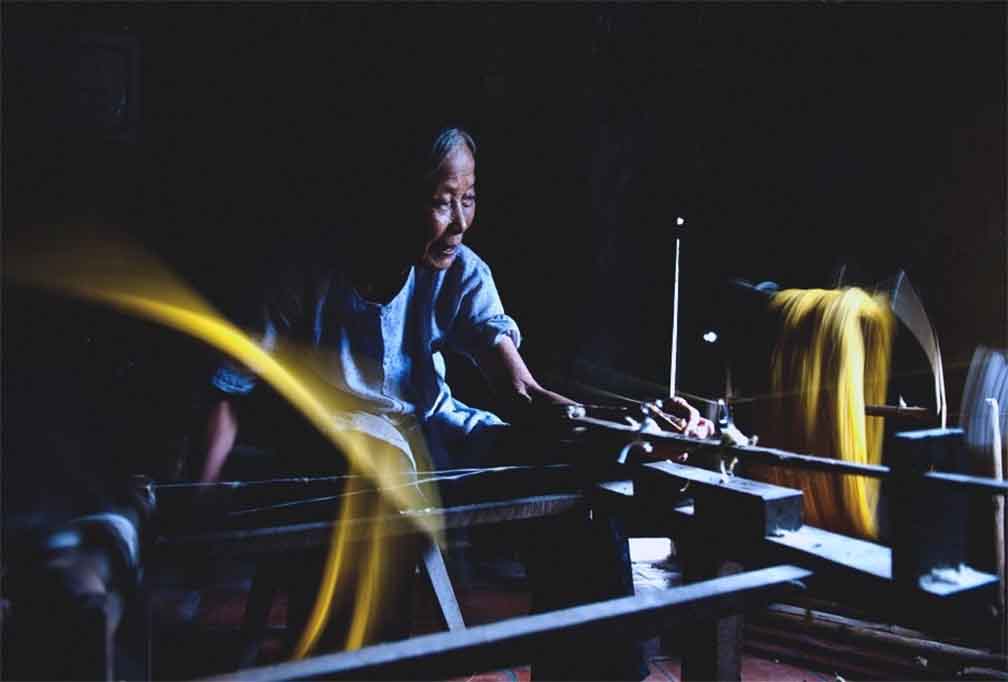 Locating next to the sea in the south of Red delta river, Thai Binh is known as the granary for northern area in Vietnam and also existed many traditional villages since long generations. Through thousands of years, crafts and craft villages have been existed and developed in Thai Binh as a inseparable part from history of the village, in which Nam Cao tussore weaving village is one of the example.

According historic literature, weaving craft existed very soon in Thai Binh since 1st century which was much earlier than forging, casting and bamboo weaving,... Tussore weaving was former traditional craft of Cao Bat village – one of two villages in Nam Cao commune. No one know exactly when tussore started appearing but according to elderly people, this craft have been existed since very long time, the red and blue tussore band were very common belt decoration for city women. Wooden looms had been improved to make larger size to make cloth or lining for luxury suit. Tussore is made by silk which looks thick but very airy that give people the cool feeling in summer and warm feeling in winter. Therefore, tussore not only win the trust of Vietnamese but also pleased customers in many countries, especially Japanese and European.

The traditional & folk artistic value attracts customers to tussore of Nam Cao. They are not mass-production but a carefully production process made by natural materials & the assiduous, creativeness and skillful of artisans. Long dress made by Nam Cao tussore with colours of ground, brown, purple,… the lab is decorated by simple threads of the same colour that creates the original color effect with youthful and elegant Asia-European style

Nowadays, Nam Cao tussore has been very well developed with about 2500 looms and spread the crafts to many other communes in Kien Xuong district, annual production is 6-8 million meters per year and turnover from VND70-80 bilion with many typical enterprises such as Dong Thanh weaving and dyeing enterprise, Dai Hoa, An Lien, Quang Binh weaving enterprises.

Nam Cao tussore has big potential for further development to determine the position in international market.

The Charm of Rattan Products (~4km)

The craft of jewelry-making in Chau Khe (~36km)

Spirituality Doesn’t Give Way to Kitsch in Hoang Thinh (~71km)

How nice rattan-slanting products are! (~90km)

The beauty of applique decoration (~244km)