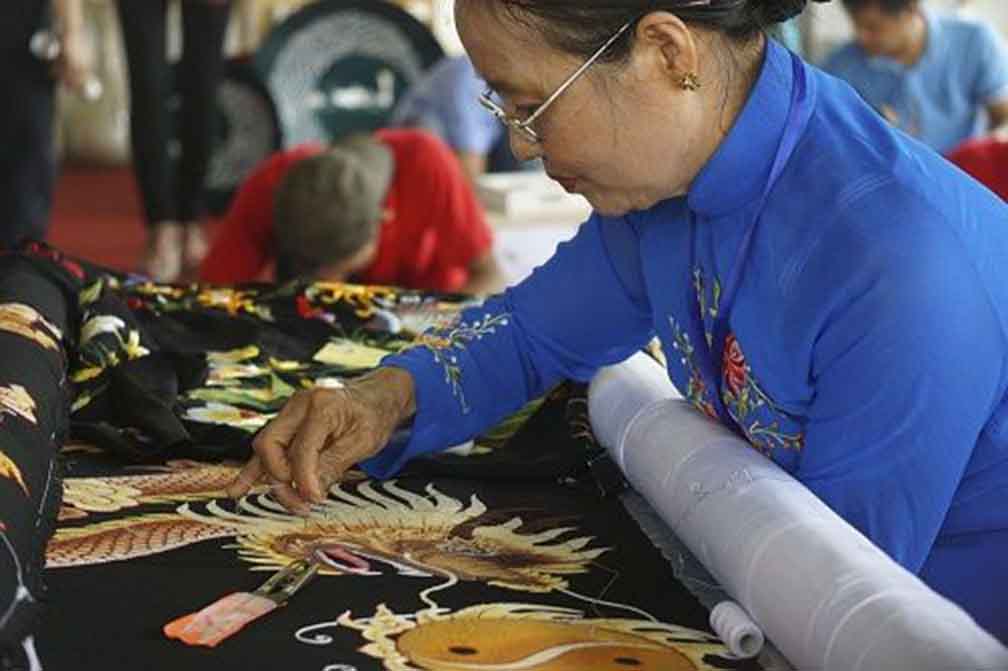 If you have ever visited Japan in January, and seen young Japanese women wearing the traditional, hand-embroidered Kimonos to celebrate the Coming of Age Day, you may be surprised to discover that Minh Lang village in Thai Binh province of Vietnam, surrounded by endless spans of rice fields, is the one of the origins of such marvelous needlework.

Minh Lang village is in the Vu Thu district, of Thai Binh province. Although it formed in early 20th century, Minh Lang village is quite famous among the embroidery villages of Vietnam. Both dynamic and creative, the accomplishments of this village craft has its origins in over a century of struggling to first acquire the skills, and then to develop them to such a high standard that their work is sought world wide. Minh Lang has accomplished an amazing feat by perfecting their own artistic hand in embroidery to become one of the most well-known embroidery villages of Vietnam.

Changes in the main export markets of Vietnam in the late 1980’s brought about many difficulties to the embroiderers of Minh Lang. However, Minh Lang villagers have been familiar with overcoming such difficulties for generations. The embroiderers of Minh Lang paved their own way to achieve great success from their sophisticated stitching and refocused their marketing strategies to meet the demands of new markets opening up to Vietnamese exports. The principle of Minh Lang villagers, to commit nothing less than all their heart and mind to each and every piece, has guaranteed their applauded success on the international market.

Previously, embroidery techniques and designs were simple with only basic colors, but today’s materials are much more diversified from fabrics such as satin and silk. Carefully selected threads are also imported from famous firms such as DMC and Anchor. As a result, sophisticated embroidery techniques have developed into a delightful variety of products from common household uses, to artistic expressions that can capture an imagination. The talented artisans of Minh Lang have received notice from not only Japanese markets, but European as well. From producing subtle and peaceful scenes on a traditional kimono; to startling and lively moments embroidered into home décor for the European markets, the inhabitants of this serene village have proven themselves truly skillful in all arenas.

Many foreign buyers are attracted to Minh Lang for its beautifully embroidered designs, prestigious reputation, high quality products, and competitive pricing on the international market. As a result, many enterprises were formed, such as Tuan Duong Enterprise, My Long Enterprise, Hoang Hung Enterprise, and Tuan Long Enterprise. The well-known Embroidery Association was formed in Minh Lang to include seven enterprises, two corporations, and forty-four production units, incorporating more than seventy percent of embroidery households in the commune. As a result, embroidery has entered into physical and spiritual life of the villagers, and spread into neighboring regions such as Dong Hung, Thai Thuy, Quynh Phu district and Thai Binh town. Having overcome difficulties and now expanding into new markets, the embroidery of Minh Lang has a bright and promising future.

The Charm of Rattan Products (~15km)

The craft of jewelry-making in Chau Khe (~19km)

Ngoc Dong Is Heir to a Priceless Craft Heritage (~42km)

Home to the pottery families (~44km)

Spirituality Doesn’t Give Way to Kitsch in Hoang Thinh (~54km)

How nice rattan-slanting products are! (~71km)

The legend of wood carving in My Xuyen (~171km)

The beauty of applique decoration (~225km)

Brocade in the Central Highland of Vietnam (~335km)