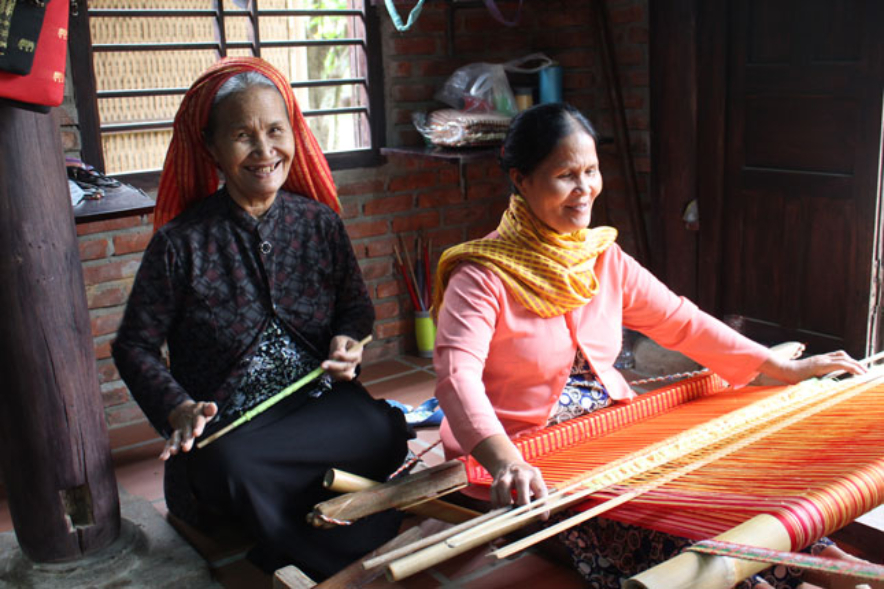 Chau Giang is situated on Phu Tan district, An Giang province which is separated from Chau Doc by a river. Chau Giang Cham village is the gathering place of many Cham people in the South of Vietnam. Different from the Cham in the central region who follow Ba Ni or Brahmanism religion, the Cham in Chau Giang follow Islam with the strict mores of the official Islamic. For example, women wear wimples. As I’ve heard, some Vietnamese boaters who used to live in refugee camps in Indonesia and Malaysia followed Islamic. When they came back to Vietnam, they were not back to their hometown but arrived to live in Chau Giang.

A typical architecture of the Cham in the South is their wooden stilt house in the direction of East-West. The house is located on the rows of woods at the height of 2 or 3 meters. Below the house is the room for loom storage or for common living. At present, people often build surrounding walls so it is not empty like before. Despite the same origin from the Central Coast, Tra Kieu – My Son sanctuary under Champa dynasty, the cultural practices of the Islamic Cham in An Giang are different from those of the Cham in Binh Thuan, Ninh Thuan as they are close to the cultural characteristics in the South. This land was described by the sweet words in the song of “Paranung drumbeat” written by a famous Vietnamese musician:

I love Mat’ra scarf
On your front I love Atidaz song
With the sound of waves
I love the flowers at dawn
On your shirt I love the moonlight
On the vast rice fields
Like sunshine on Tien Giang
Like wind blows on Hau Giang
Like the words of missing In a distanced voice.

We visited Masjid mosque which has the symbols of the sun and the crescent moon, representing Islamic; doors and roof in the shape of a cone. The key color of the mosque is white. There is no statue in the mosque as they do not worship idolatrous. I covered a scarf on my head to show my respect to the regulations of Islam.

The Cham have to pray 5 times a day. If they are too busy to go to the mosque, they need to pray at home. The mosque is the place where not only religious activities take place but also children are taught to read and write. More specially, they teach people to read the Koran in Arabic. The behind of the mosque is the cemetery of the Cham. This place looks simple as their opinions on the dead is simple as well.

Next, we visited a weaving workshop and were welcomed by some friendly middle-aged women. There is no girl at the workshop. The Cham girls who have not got married often stay at home and don’t often meet with strangers. Weaving looms of the Cham are the large ones. Until now, they are still weaving by handmade wooden looms. Some women started weaving to show me. From their hands, the unique patterned cloths appeared. They also weave headscarf and hair covering hats. I tried to wear both of them and saw myself as different from other days.

We said goodbye to Chau Giang Cham village in wistfulness. The village has kept the beauty of a culture and arts worshipping and architectural talented community. However, deep in the sad eyes of the Cham I’ve met here, there exists the regret and melancholy about a prosperous time of a bygone kingdom.

The beauty of applique decoration (~275km)

Spirituality Doesn’t Give Way to Kitsch in Hoang Thinh (~280km)

The legend of wood carving in My Xuyen (~295km)

Ngoc Dong Is Heir to a Priceless Craft Heritage (~305km)

How nice rattan-slanting products are! (~307km)

Home to the pottery families (~316km)

The craft of jewelry-making in Chau Khe (~322km)

Nostalgic Beauty - All That Glitters Is Not Gold (~330km)

Brocade in the Central Highland of Vietnam (~334km)