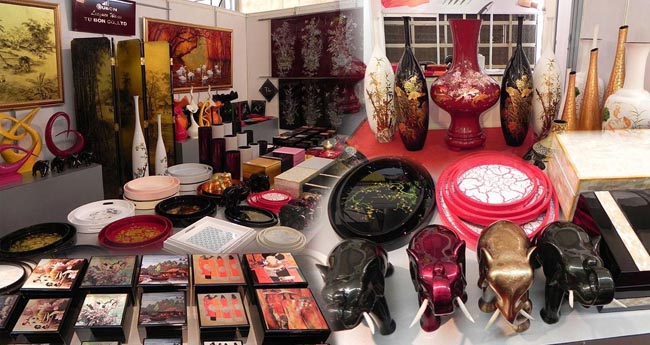 About 7km away from Thu Dau Mot city hub in the North, Tuong Binh Hiep is the traditional lacquer village being developed and maintained over generations. Tuong Binh Hiep’s lacquer works have long become famous throughout the country in quality and sophistication imbued with the East Asian characters.

In the past, Tuong Binh Hiep was Binh An district’s small village producing ancient pictures and was the place receiving residents with clever hands from the North and Central. The combination turned the village into the hub of lacquer picture. Thu land people realized the village’s advantages and made up it into a traditional craft village.

The golden era of Tuong Binh Hiep lacquer village was in the period of 1980-1990 with the establishment of lacquer cooperatives of more than 160 members. Accordingly, 744 households lived mainly on producing lacquer works. The development created jobs for more than 1,500 laborers at that time.

During his research process, Tran Van Khiem invented successfully in replacing cotton to make up the main part for lacquer works. This was a breakthrough helping enrich Binh Duong’s traditional lacquer collections. "The products have such high quality due to the thick resin extracted from the cay son (Rhus succedanea) which has been used by generations of local artisans," said Tran Van Khiem who has over 50 years of experience in the craft. Khiem who runs a family concern is among many artists in Tuong Binh Hiep who have stuck to the resin from the Phu Tho trees which is famed for lacquer that gleams for 30-40 years. The 73-year-old said he learned the craft as a teenager from a veteran artist in the village.

Artists paint the colored resins directly on to the surface of wood, bamboo or metal. The resins stick fast to almost any surface.

"Then we spent many days polishing the surface, " Khiem said.

"Usually it will take us around four or five months to complete a 2 by 3m painting using this traditional process," he said.

"It is slow and costly. However, I'm determined to maintain this traditional technique within my family," he said.

"Every step in making lacquerware is important and demands skill and dexterity from workers," said Tran Le Tri, manager of the Minh Nguyet Lacquer Co.

With myriad designs worked out in eggshell and mother-of-pearl inlays, the village offers lacquerware in thousands of designs and models. Among the most common items are boxes, trays, vases, pots, and paintings.

"Each product is not only pleasing to the eye, but also useful and durable," Mai Thi Hoa, said a satisfied customer from HCM City.

Over 100 households in Tuong Binh Hiep now earn their living from the craft which had been pushed to the brink decades ago.

These days, Tuong Binh Hiep lacquer village has become one of the attractive destinations for tourists inside and outside of the country. In addition, The attraction can help promote the traditional craft village’s values and diversify tourism products of the province.

It is necessary to list Tuong Binh Hiep lacquer village into one of the tourism destinations and to promote widely the village to tourism companies as well as upgrade Tuong Binh Hiep ward’s infrastructure facility for luring tourists.

The most important thing is to build excursion models for tourists to help them enrich knowledge on traditional craft products.

Brocade in the Central Highland of Vietnam (~187km)

The legend of wood carving in My Xuyen (~199km)

Spirituality Doesn’t Give Way to Kitsch in Hoang Thinh (~288km)

The Charm of Rattan Products (~298km)

Ngoc Dong Is Heir to a Priceless Craft Heritage (~310km)

The craft of jewelry-making in Chau Khe (~314km)

Nostalgic Beauty - All That Glitters Is Not Gold (~319km)

Home to the pottery families (~320km)

How nice rattan-slanting products are! (~325km)

The beauty of applique decoration (~363km)