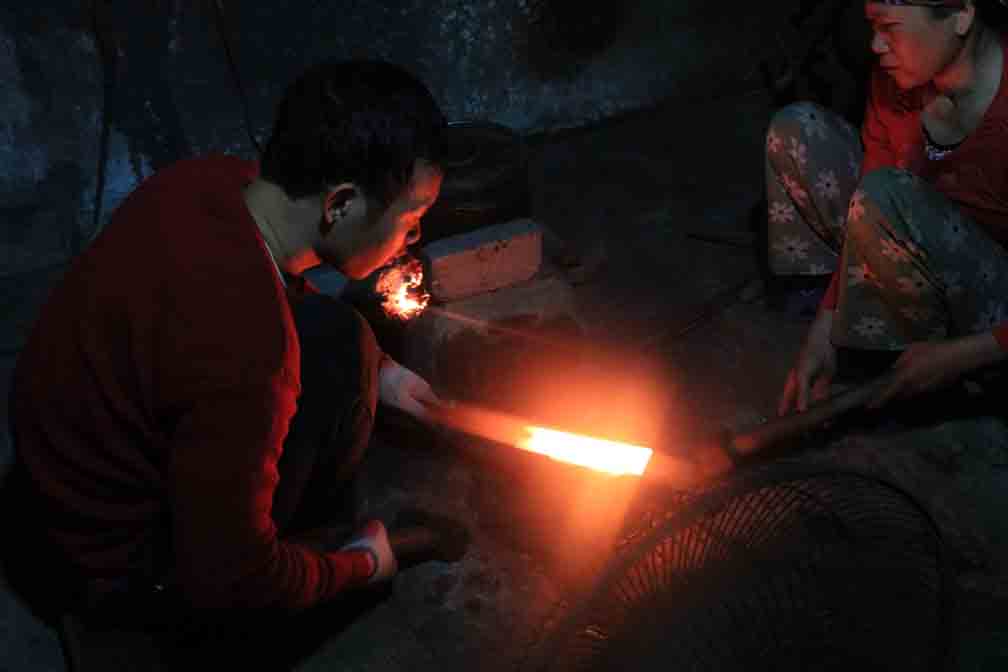 For centuries blacksmiths from Da Sy Village have been hammering out quality metal products that are famous country-wideFrom early morning ‘til late afternoon, the sounds of steel and iron being beaten with hammers resounds throughout Da Sy Village, as it has for 400 years or more. The village outside Ha Noi City is famous for its metalware. The name is known throughout Viet Nam.The first impression one gets when entering Da Sy Village is a rush of excitement at the sounds of hard work and enthusiasm – a chorus of hammering on family anvils.

In the showroom of the Da Sy Association of Traditional Forgers, villagers often sit around telling historical stories about the village and different ways of production. Visitors can also see the metal being beaten into knives, scissors, sickles, hoes, spades and other farm and garden tools.

The village is one of the best places in the nation to see blacksmithing practices that go back nearly 3,000 years to the beginning of the Iron Age in Viet Nam, even further if one takes in the renowned bronze culture of the Dong Son period from which the ironwork evolved.

Da Sy villagers are proud of their homeland for many reasons. Apart from the traditional forging trade passed from generation to generation, it is also well known for many successful doctors, some of them famous. That is the reason why the name was changed to Da Sy (Many Doctors).

According to the late Professor Tran Quoc Vuong, metal forgers from the Dong Son cultural region, of which today’s Da Sy Village can be included, provided the Hung founding kings with weapons to protect the nation, then known as Van Lang, against huge armies of northern invaders.This means that Da Sy’s blacksmiths can probably claim a direct connection with the founding kings of Viet Nam – and gives their work an historic edge few other towns or cities in Asia can claim.

Weapons made in the village have also been used in the battles for liberation in the 19th and 20th centuries, giving their work extra cachet. When peace returned to Viet Nam 40 years ago, the Da Sy people returned to making to agricultural implements such as ploughs, rakes and machinery parts or kitchen implements.

Today’s Da Sy’s knives and choppers are still renowned for being hard wearing and able to retain a hard and sharp cutting edge. Although mass produced factory tools have flooded the market in recent decades, Da Sy people are full of confidence about their products and their future. Moreover, the designs of the hand-made village products are much more varied and individualistic. About 100 types of knives and more than 10 types of scissors are made in Da Sy Village.

According to the head of the Da Sy Association of Metal Forgers, Le Thanh Yen, the work is hard and includes many complex processes, such as making rough drafts, keeping fires burning, hitting red-hot iron into shape with hammers, tempering (strengthening) the metal with water – and then sharpening the final product

Ngoc Dong Is Heir to a Priceless Craft Heritage (~17km)

Spirituality Doesn’t Give Way to Kitsch in Hoang Thinh (~35km)

The craft of jewelry-making in Chau Khe (~41km)

Nostalgic Beauty - All That Glitters Is Not Gold (~48km)

The Charm of Rattan Products (~72km)

The beauty of applique decoration (~173km)

Brocade in the Central Highland of Vietnam (~382km)