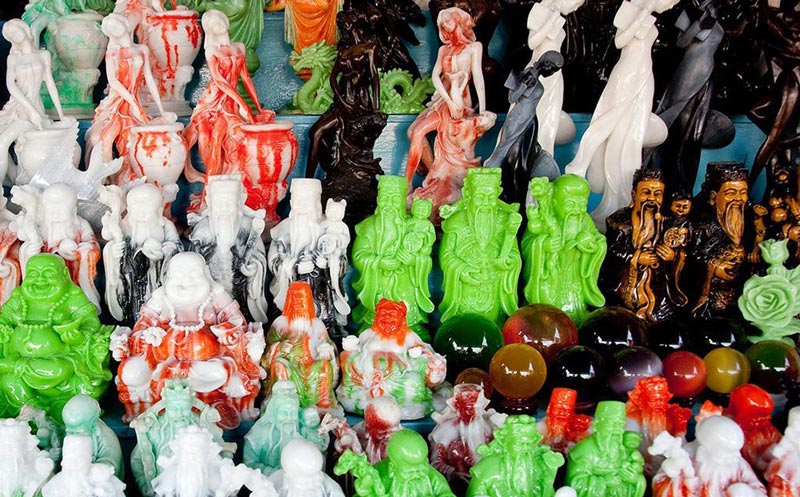 Founded 200 years ago, Non Nuoc Stone Carving Village is a traditional village famous for fine art stone engraving products. The founder of the village was craftsman Huynh Ba Quat, a local in Thanh Hoa Province. He brought his families to live here, founding a craft village manufacturing items serving the daily lives of local people such as rice mortars, grain grinders, and tombstones. There is a place for worshiping him as the founding ancestors of the village and villagers hold a special ceremony on the 6th day of the first lunar month every year to honor him.

Nowadays, the village is not only a production facility with a variety of products but also an attractive destination for those who want to take a firsthand look at artisans creating stone-carving masterpieces and buy beautiful souvenirs made from stone such as bracelets, rings, string of beads, frog paperweight, the pair of angelfish by pink marble,…

Mr. Nong Quoc Thanh, Deputy Director of the Department of Cultural Heritage under the Ministry of Culture, Sports and Tourism said that the Village has been recognized as a national intangible cultural heritage recently. Under the provision of the Law on recognizing cultural heritage, Non Nuoc Stone Carving Village has meet 4 following criteria: Representing local and community cultural identity, reflecting cultural diversity and human creativity which have been preserved from generation to generation; being capable of recovery and long-term survival, being voluntarily nominated by the community that makes commitment to preserving it.

Currently, Non Nuoc Stone Carving Village has nearly 500 production facilities with over 3000 carvers. Production facilities concentrate around Marble Mountains areas. Products of the village are praised to be sophisticated, diverse, and fascinating in every aspect. Stone-carving artisans can make products of all kinds from stone-made household utensils to artworks, decorative stone statues, and Feng shui mascot. Products of Non Nuoc Village is not only well known in domestic market but also exported to large international markets around the world such as America, Japan, Europe, and so on. The revenue from stone craft annually reaches 100 to 200 billion VND.

For the village to be preserved and developed, stone production facilities will be centrally planned into a new Non Nuoc Village which is a dedicated production area at residential groups 52 and 53 in Ngu Hanh Son Districts, Da Nang City, about 2 km away from the old place. The new place is constructed on an area of 35 hectares, with an investment budget of about 154 billion VND.

The poetic hats of Vietnam (~69km)

The legend of wood carving in My Xuyen (~104km)

Brocade in the Central Highland of Vietnam (~115km)

The Charm of Rattan Products (~252km)

Nostalgic Beauty - All That Glitters Is Not Gold (~282km)

The craft of jewelry-making in Chau Khe (~284km)

Spirituality Doesn’t Give Way to Kitsch in Hoang Thinh (~297km)

Ngoc Dong Is Heir to a Priceless Craft Heritage (~302km)

Home to the pottery families (~307km)

How nice rattan-slanting products are! (~331km)

The beauty of applique decoration (~457km)