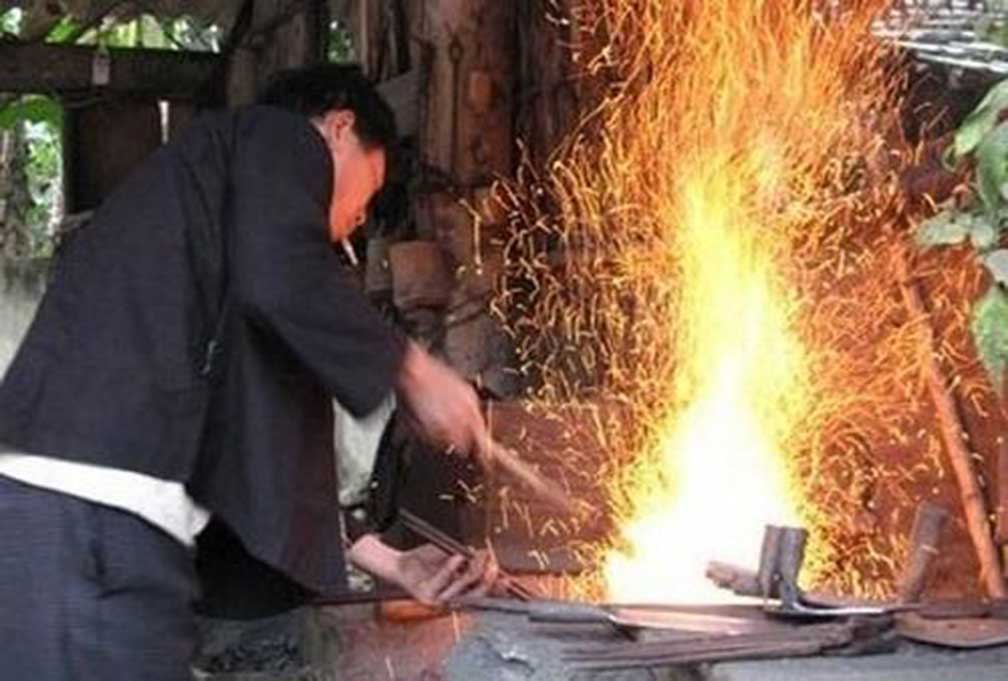 The Phuc Sen forging village is located at Phuc Sen Commune, Quang Uyen District, Cao Bang Province. It is said that this village was established in the 11 th century. In the early days, the villagers produced weapons for the soldiers of Nung Ton Phuc and Nung Tri Cao to fight against the Song army. After the war, they made farm and domestic tools such as ploughs, hoes, knives and scissors. It is also said that the villagers used to cast cannons and grenade casings, especially during the resistance war against French colonialism. Thus, this craft village has a long tradition of forging. There is also another tale explaining the origin of this craft village. It says that from ancient times, there was an old, strange-looking man walking through the village. He noticed that the local Nung An people lived only by hunting, hence they were always poor. However, the old man found that the local people were very kind, and they had extraordinary bright eyes because they could walk in the forest at night without any lighting equipment. Therefore, he decided to train the Nung An people how to forge tools. Following that, the old man left Phuc Sen without saying goodbye to anyone, and no one ever knew his name or address. Today, the Nung An people in Phuc Sen have established a temple to commemorate their ancestor. Every family has its own incense bowl to express their gratitude to the ancestor, who brought the craft to the village and improved their lives.

Currently, Phuc Sen village has nearly 400 families, all being Nung An people. More than half of the households are engaged in forging, so the village has become the largest “forge factory” in North Vietnam selling different kinds of knives, swords, broadsword and production tools. Many families have practiced forging for tens of generations. The forging products of the village are famous for their sharpness and durability, and are sold throughout the country as well as being exported to China. The people of Phuc Sen village say that the way they forge a knife is different from that of the Kinh people. Before they make the shank, they have always forged the knife blade until they are satisfied with the sharpness. It implies that the quality of the product is more important than the appearance. They have an innate ability to sense the steel so that products are durable but not brittle, and flexible but not soft. The water to harden steel is prepared using secret methods by each family. Usually it is a mixture of lime water with charcoal ash of ironwood that is left overnight before use.

There is a plausible feeling that perhaps Phuc Sen forging village is fortunate to have inherited the essence of the brilliant Dong Son Culture that is famous for bronze arrows in the time of King An Duong Vuong. However, thanks to the natural conditions of the karst forests with an abundant source of minerals such as iron, tungsten, tin, and copper, and the skill, wisdom and diligence of the Nung An people, they were able to develop the sophisticated products.

Nostalgic Beauty - All That Glitters Is Not Gold (~55km)

The Charm of Rattan Products (~71km)

Home to the pottery families (~77km)

Ngoc Dong Is Heir to a Priceless Craft Heritage (~85km)

How nice rattan-slanting products are! (~101km)

Spirituality Doesn’t Give Way to Kitsch in Hoang Thinh (~109km)

The beauty of applique decoration (~256km)

Brocade in the Central Highland of Vietnam (~386km)