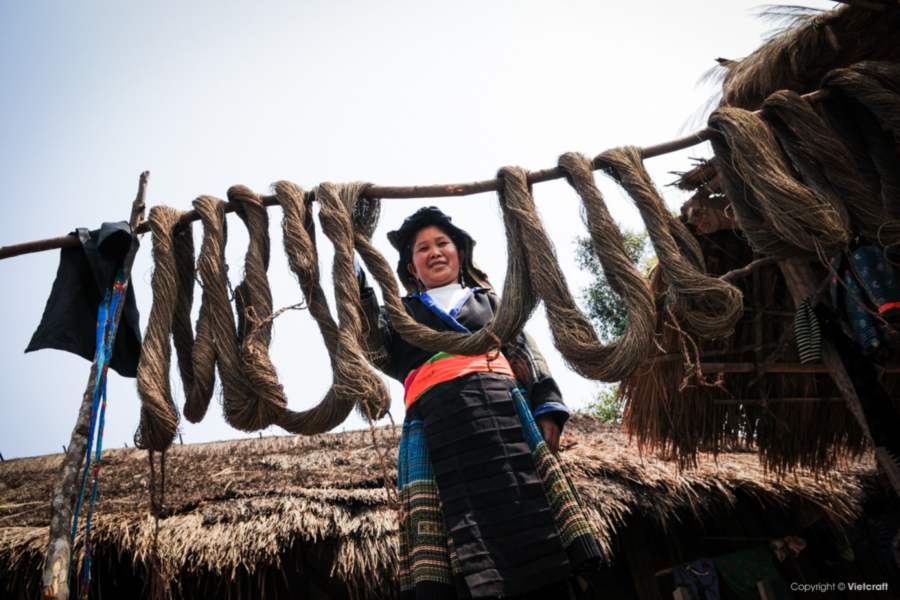 Visiting Dien Bien, a beautiful province in the Northwest of Vietnam, the visitors will be greatly impressed by how unspoiled the mountain was and with the folk songs, dances and the traditional crafts of the local people. Among these crafts, brocade weaving of Lao’s people in Na Sang II commune is always considered one of the wonderful treasures of the province, where you can easily find out on the brocade design the green of forest trees, pink & red of woodlands flowers, bright yellow of sunlight. You will also discover the love and passion of Lao’s women in their traditional weaving.

Brocade production in Na Sang II has been existed for such a long time. The products were originally made for the family needs and to use as dowry when girl comes to her husband’s house. All Lao’s girls and women know brocade weaving and embroidery, they usually make by themselves blanket, mattress, “Pieu” scarf,.... brocade is becoming an inseparable part in their physical and spiritual life.

The decorative patterns on the brocade of Lao’s people are very diversified and containing profound meanings. It may be difficult to comprehend all the meanings of patterns but it is quite impressive to learn the meaningful stories behind each one. By listening the elder’s explanations we can learn about their aspirations, understand their principles of the life, and view their perception of the universe.

"Why There Are Motifs Of Dragons With Red Necks?"

According to legend, a wife wanted to harm her husband’s younger sister. Once when going to fetch water, she picked up a dragon egg. Then one day, when her husband and his sister were going to the field, she boiled two eggs, one big (dragon) egg and one small (duck) egg for them to carry and told them that the sister should eat the big egg and that her husband should eat the small one. Seeing that her brother was tired, the sister let him eat the big egg. When he was thirsty, the brother went to the stream to drink water and was transformed into a dragon. The brother told his sister to tie a red cloth to his neck so that she could recognize him if they met each other during the flood season.

"He Asked The Elephant If He Was His Father"

Lao people like to weave motifs of people riding elephants. Legends say that a long time ago, there was a woman working in a swidden field. She was so thirsty that she drank water from a small hole in the form of an elephant’s footprint. She came home, got pregnant and then gave birth to a boy. As the boy grew up, children in the village teased him because he had no father. Then one day the boy followed his mother’s instruction to find his father in the forest and he saw an elephant. He asked the elephant if he was his father. The elephant answered, “If you are my son, climb up my trunk up to my head and ride on my back.” The boy followed his words and succeeded. Lao people weave these motifs to remind those who go into the forest or to the field not to drink water from small holes.

"If A Tiger Is Killed, Three Generations Will Have Bad Luck"

Among Lao people, a tiger is a totem of the Luong lineage. If a tiger is killed, three generations will have bad luck. If someone sees a dead tiger, he or she must cover him with a white cloth and cry to express condolence. The Luong lineage weaves tiger motifs to be reminded of this belief, while other lineages weave this motif to remind their descendents that if someone gets married with a Luong person, he or she will know it is a totem.

"Only Lucky People Can Ever See A Snake Couple"

Only lucky people can ever see a snake couple wrapped around each other. When that happens, a man takes off his shirt and throws it at them and waits until they leave, and then he brings the shirt home and keeps it in his trunk. When a male member of the family reaches a marriageable age, he wears this shirt and marries his lover and the couple is happy. In addition, this shirt brings luck to people when they do business. Lao people weave the motif of snakes entwined together in order to bring good luck.

"The Sister Transformed Into A Bird"

There was a family in which the more a brother loved his younger sister, the more his wife hated him. If the brother wanted to give his sister something, the wife wanted to keep it for herself or receive the bigger portion. The sister despaired and went into the forest and committed suicide by eating poisonous leaves. She then transformed into a bird who chirped “w, vit vit, ho ho” which means in Lao “my brother gives it to me and my sister-in-law keeps it.

Even current fashion trends have made the decorative patterns of the Lao in Na Sang II a source of inspiration to Vietnamese and international designers for their special collections. A unique combination of decorative patterns and interior décor such as bed covers, pillows, cushions and lovely gifts such as handbags, scarves, bracelets and postcards feature the weaving patterns of Na Sang II and exported throughout the world.