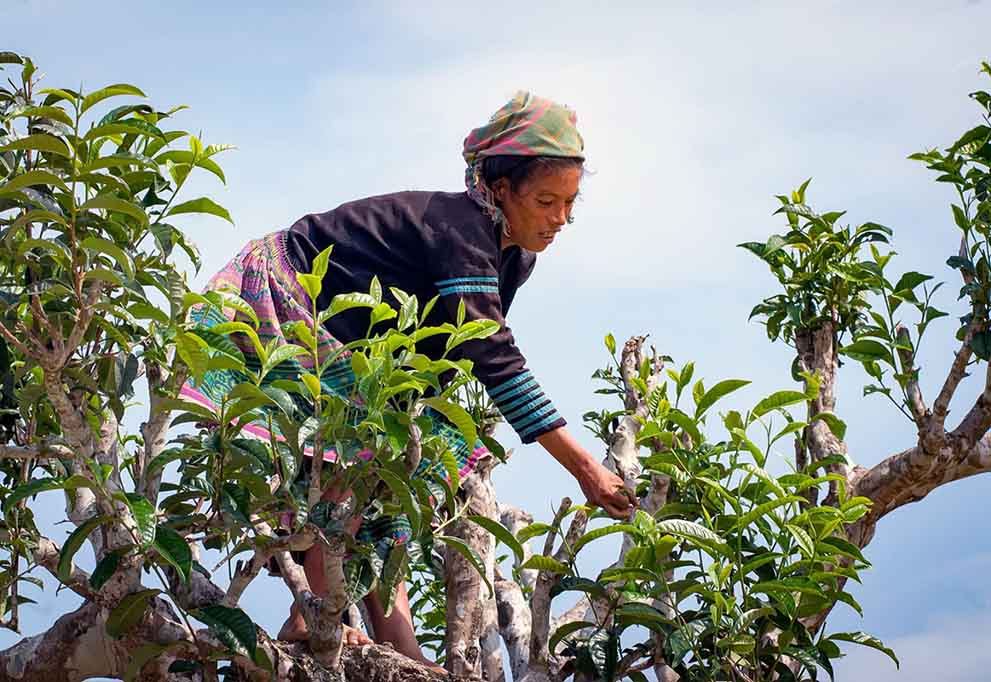 Situated at an altitude of nearly 1,400 meters above sea level, Suoi Giang in Van Chan district, Yen Bai province is the home to the oldest tea trees in Vietnam. "I have travelled across 120 countries which have tea trees in the world, but I’ve not seen any perennial tea trees like those in Suoi Giang," wrote an academic of the USSR Academy of Sciences, MK Djemukhatze, in the visitor’s book of Suoi Giang in 1960.

Called Shan Tuyet tea, as explained by local people, has a special processing technique. The fresh tea buds are as big as banian buds, coated with lanugo. After being processed they are still big, covered with a milky layer of “snow,” shiny, aromatic scents, along with a smoke inhalation. So it is called Shan Tuyet (snow). When drinking, the tongue will feel the bittersweet taste and then persistent sweetness in the throat.

If visitors go to Suoi Giang in the tea harvesting and processing season, they will smell a characteristic flavor of this tea region. Due to the special climate here, locals do not have to use any kind of pesticides because insects cannot develop. In the winter, there is little sunlight and fog covers the entire region. The tea buds are also covered by fog and you will feel a biting cold on the fingers when picking tea buds.

The tea trees here are over 300 years old. Their trunks and buds are very big, which makes them different from other types of tea. Shan Tuyet tea varieties have all three factors: aroma, strong taste and blue water. The tea, from harvest until processing, is produced by manual methods of the Mong ethnic people here.

Ancient Shan Tuyet tea trees are covered with pale moss and sometimes white mold, plus spikes, but the leaves are deep green, creating a natural beauty that everyone loves. For that reason, Suoi Giang has become a tourist attraction.