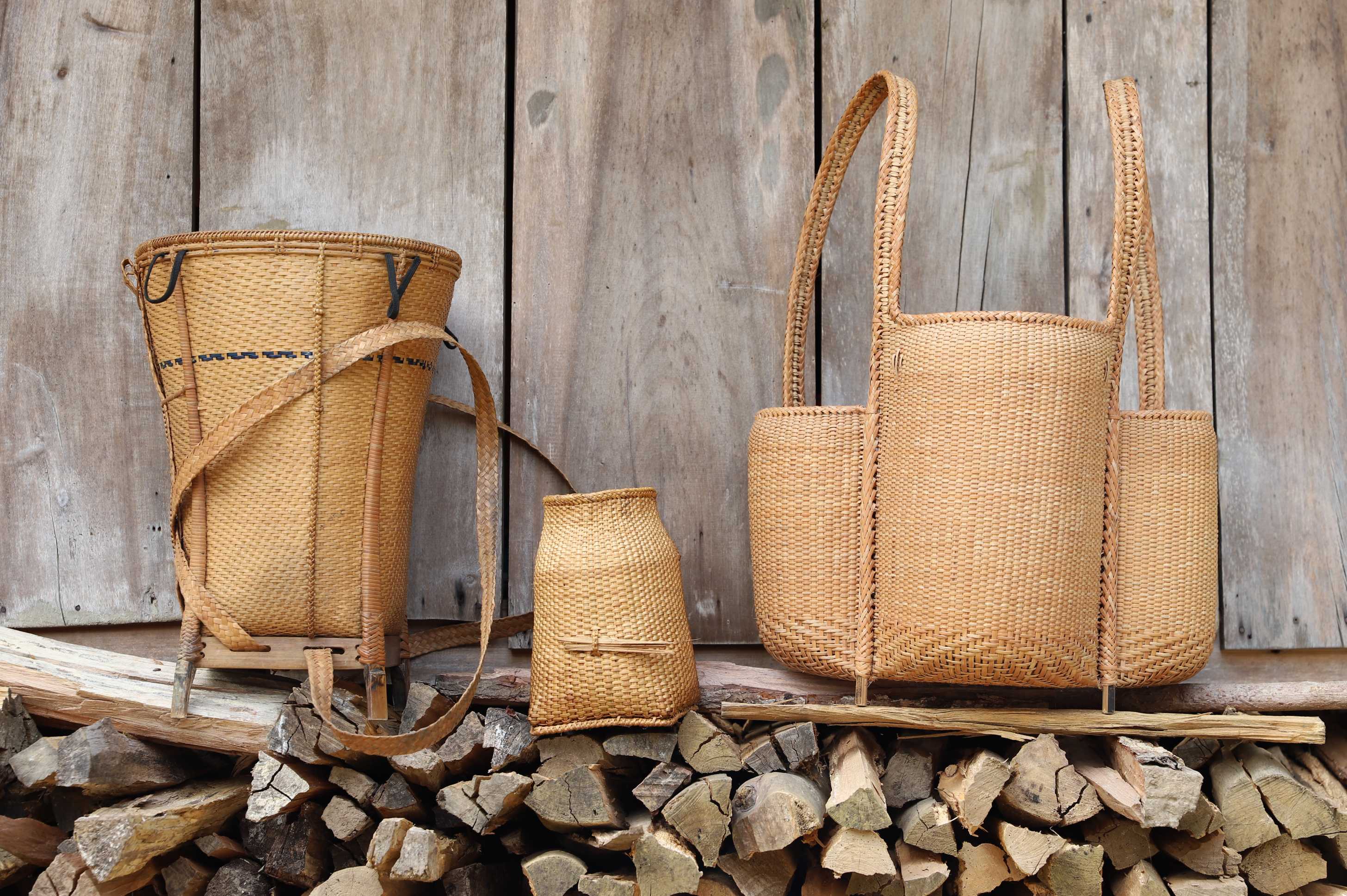 If you have never seen the beauty of a Co Tu backpack, it is difficult to understand the wonderful plaiting techniques that only the Co Tu people can master. There are very few places on this earth where such beautiful backpacks can be made... From the production stage to religion and spirituality, the backpack is always attached to their daily life.

The Co Tu people have many kinds of backpacks, each of them has their own purposes, for example: backpacks that contain rice (h’dool, ul dool), vegetable (por eeng, ul teeh), jewery or precious items (p’rom/g’ruh), cassava (dong kier), wood (dong mat); backpacks for men hunting (to leec, ta leec); backpacks for women; backpacks for children (dong pa nien)... Although they are different in shapes, backpacks are mainly made by rattan and bamboo. Plaiting backpacks is a chance for The Co Tu man to prove his skills to the woman. A beautiful backpack is always attached to skilledful hands. The rattan to plait backpack is duarable, it must be taken from the deep forest, mostly “xa phun” rattan, “ra” rattan, “song” rattan, “cam” rattan... Backpacks are considered as a jewery so Co Tu men always try to make the best and most beautiful backpack that fit a specific body shape or use purpose. The backpack that contains wood is plaited seperately; the backpack containing rice must be plaited tightly; backpacks for men must be plaited with many compartments to carry items... If a Co Tu man wants to marry a Co Tu woman, he must know how to plait a backpack before the Moon seasons, how to “love” dance or play instruments...

Talking about the Co Tu people’s backpacks, we must mention ta leec. This three-compartment backpack is the wonder of plaiting art. Ta leec has become the beauty of the Co Tu people on the marvelous Trường Sơn Mountain Range. Co Tu men without ta leec are just like a stream without water, a forest of trees without green leaves. And the whole life of Co Tu men is encapsulated in the ta leec.

Day by day, ta leec follows the man traveling through forests, wading across streams and then returning to his village. The Co Tu people have said: The backpack has 3 compartments; the middle compartment is the largest one, called the wife compartment (or the mother compartment). This compartment usually warms rice and food for the upland seasons, keeps the machete for slash-and- burn and upland cultivation, and as a protection against predators and ghosts. The other two compartments are similarly plaited but smaller. The right compartment symbolizes the first- born child and is used to hold drinking water, the left one (represent the younger child) is used when traveling through forests to pick bamboo shoots, vegetables or catch fish, frogs in the streams... these gifts of nature are always reserved for the youngest-child.

All Co Tu men know how to plait, but not everyone knows how to plait the ta leec. Only the skillful, clever and savvy people, who understand the material and the plaiting technique can devote their whole heart into the ta leec and create it. To plait the ta leec, Co Tu men always plait the wife compartment first, then the other two which are smaller. The plaiting method for them is still the same as that used for the mother compartment (the wife compartment). Rattan used for plaiting is always za rattan (this type of rattan is firm and strong). The Co Tu people are very creative when the backpack’s baseplate is more sparsely plaited; so, whenever wading across streams or catching fish, water is not congealed to keep it durable. Moreover, the top of the backpack is made of some rattan splits, which make it look charming and unique.

The Co Tu people are proud of their ta leec plaiting technique. Along the Trường Sơn Mountain Range and Tay Nguyen, some other ethnic minorities also make three-compartment backpacks but no one can make compartments as equally round and beautiful as the Co Tu people do. The secret for this is that, when having completely finished a backpack, they fill it up with sand and soak it in a stream for a long time. The sand puts pressure on the backpack and makes it equally round. After the process of shaping the backpack, the Co Tu hang it in their kitchen attic, until it is smoked for some time and turned into a shiny black color. As a result, one backpack can be used up to 20 or 30 years. The longer the backpack is used, the more beautiful and shinier it becomes. No matter where they travel, Co Tu men always “carry” their wife, children and land on their shoulders.

The craft of jewelry-making in Chau Khe