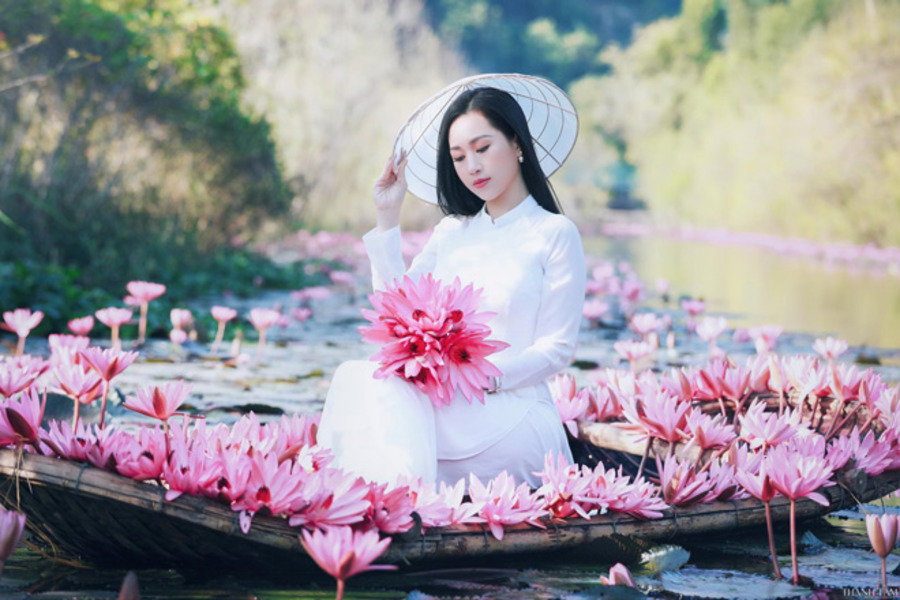 Located at about 60 km from the center of Hanoi, Trach Xa village, Ung Hoa district, has long been famous of Ao Dai and festive dresses. It is said that, the Imperial Consort of King Dinh Tien Hoang had learnt tailoring in the palace, introduced it to Trach Xa village and taught the people tailoring that made it become the traditional profession of this village from generation to generation.

Ao Dai is considered as “the national soul and spirit”, it is the image an elegant Vietnamese woman. The beauty of softness and gentleness of Ao Dai is represented with a high collar two graceful laps in front and behind. The curve line at the bottom of the waist can also increase the sexiness and attractiveness of the Vietnamese women.

Nobody knows when exactly Ao Dai was first made as there is no record and not many people have done any research about it. However, the oldest traditional garment of Vietnam, according to the pattern on the surface of Ngoc Lu kettledrum was thousands of years ago, crafted an image of a woman wearing the long dress with two separated laps. From the very first days of literature and musical culture of Vietnam, Ao Dai has always been the authors’ inspiration, they described the beauty and elegance of Ao Dai on Vietnamese women. In the world’s literature, it is unlike to have any poem describing clothes or costumes that could be so lively and romantic just like songs or poems praising Ao Dai in Vietnamese literature. Talking about Ao Dai, people would think of Vietnam and vice versa. Through ups and downs, with many changes in styles over the years, sometimes it was just so strangely large (at the beginning of 19th century), sometimes it was highly collared, sometimes it was long enough to cover one’s knees but sometimes the laps were extended to one’s heel, and the material could be chosen differently either silks or tussar silk, Ao Dai has always been an endless theme for the Vietnamese authors.

Ao Dai always has its own way to promote the beautiful curves of different body shapes. The top part tightly covers the body and the 2 laps are nicely separated so that people could wear them comfortably but still elegant and feminine. Ao Dai and the Vietnamese woman, is a gentle connection just like “a spinning silk.” As beautiful as a girl can be when wearing Ao Dai to school, Ao Dai symbolizes the beauty of a Vietnamese woman in every international beauty competition…. When wearing a scarf ring on the head, it looks like a “crown”, Ao Dai becomes so familiar and sacred for a woman on her wedding day….In the events, Vietnamese Ao Dai would also sparkle, unique and as special and beautiful as any other traditional costumes in the world.